Eugene Landy: "He was not a good man" 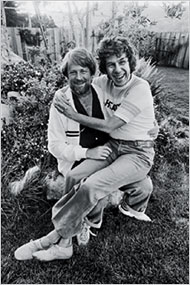 NEWSWEEK "The first therapist I ended up with was the late Dr. Eugene Landy, the psychologist who eventually surrendered his license in California due to a controversial relationship with Beach Boy Brian Wilson. He was not a good man. He put me on so many drugs I didn't know if I was coming or going."--Maureen Mccormick, aka Marcia Brady