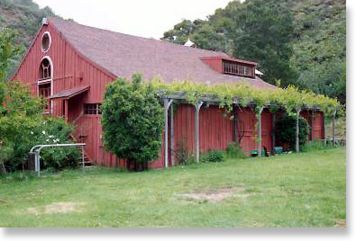 RP: He had Brian Wilson's white piano. He had Beach Boys road cases from a 1970s tour with the Brother Records logo on them, the Indian on the cover of Surf's Up. He was amazing. A really sweet guy.

JT: We got to hear a tune that he recorded with Neil Young, David Crosby, and Stephen Stills that no one's ever heard before. It was incredible. Being able to bear witness to something that exclusive and that mind-blowing, you're an asshole if you don't realize in that moment that this is fucking amazing."

I don't know if Fleet Foxes actually visited the fabled Red Barn, but, if they didn't, they probably did get pretty close. Here's some information about the Red Barn:

"Red Barn Recording Studio is an exquisite recording environment located in a very quiet and isolated canyon in Big Sur, California. Red Barn is one of the best kept secrets in the recording industry and has been held as a private recording studio by Al Jardine of the Beach Boys, until now. Red Barn Recording Studio was originally built by Al Jardine so that the Beach Boys could have an isolated and creative space to hang out and create music. In a labor of love Jardine dismantled an existing barn from one of the original Big Sur homestead families, the Pfeiffers, and then built the studio with an eye for comfort. Re-using the original barn lumber, Jardine re-created the rustic, original look that you see today. Al Jardine has owned the ranch where this studio is located for 25 years and Red Barn Recording Studio was completed in 1989."