Flirting With Pirates: Whose Master's Choice?

This bootleg release consists of an audio CD and a DVD housed in a small hardback book. The book is roughly 6 inches tall and 5.5 inches wide. The liner notes are ripped from Keith Badman’s book “The Beach Boys: Definitive Diary.” 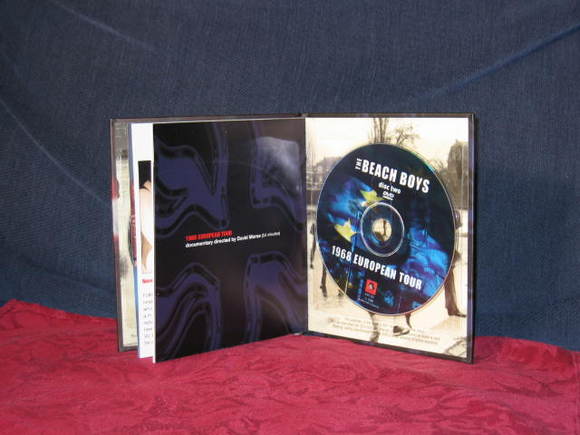 The CD has twenty-five tracks from two live shows- December 1, 1968, the Palladium, London and December 8, 1968, the Astoria, Finsbury Park, London. One track from the December 1 show, “All I Want To Do,” was officially released on the ”Rarities” album.

All of the tracks from the December 8 show were released on the “Beach Boys ‘69/Live in London” album. 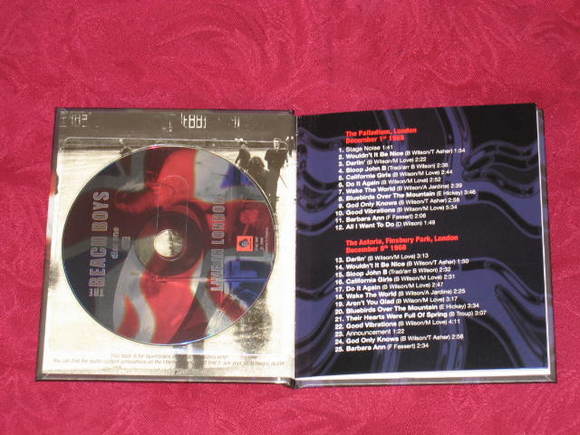 The HMC boot has the “raw” live recording. The officially released version had some overdubs, additional mixing, sweetening, etc. The “raw” version has been booted before.

A thorough examination of the audio disc will require more time than I have now. But, I have two CD players hooked up to my amplifier and I intend to do a close A/B analysis of the boot version versus the officially released version in the future. 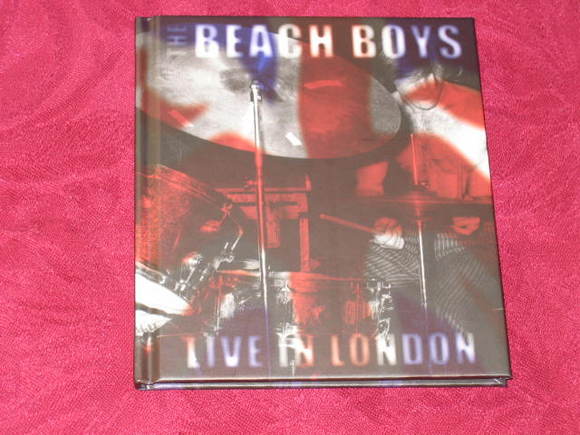 Part one of my review of “LIL” will focus on the DVD. The entire 54 minute DVD consists solely of David Morse’s Beach Boys 1968 tour film. I’m not sure of the exact title of the film because it doesn’t ever appear, except on the added intro mentioned below. I could not find any details about David Morse or any of the rest of the crew listed in the end titles. 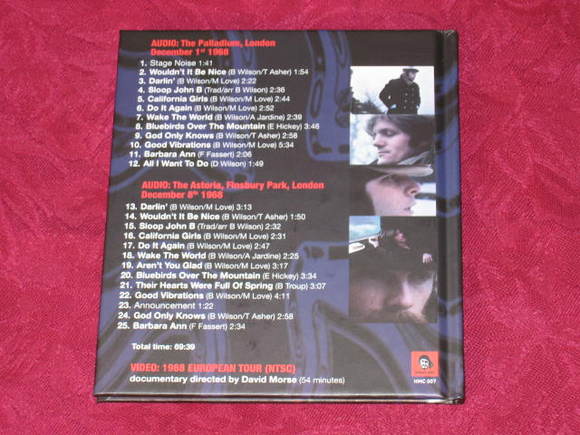 The following comments are based on the notes I made while watching the movie. I think I caught most of the highlights and the lowlights. I might have missed a few minor things, but this covers it pretty well. 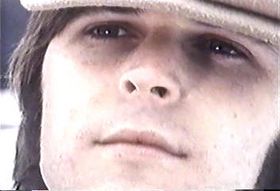 There are no menus and the film just starts right up. This version has a short, 30 sec., intro not found on “NFB.” The intro doesn’t seem to have been made with the rest of the film and was probably made much later by whomever put this DVD together. It’s very simple, short edited bits from the film with some instrumental music. It ends with a title card: “Beach Boys 1968 European Tour, directed by David Morse.” The “NFB” version also has some “film lead” that’s been edited here.

Both films start with a view of a fire truck driving across the tarmac at a UK airport (Heathrow?). The song “Friends” plays in the background as the BBs get off the plane and greet the cheering fans. The BBs sign a few autographs as the fans and press fawn all over them. And here we notice the first major draw-back of the film- none of the sound is synched up with the images. The film and sound were recorded separately. Even the fan noise, and other ambient noise throughout the film, seems to have been recorded after the fact to give the appearance of “live” sound. This type of sound/image pairing was not uncommon for the time. It’s unfortunate, but bearable.

The BBs pile into limos as the title “Beach Boys” appears in small, white print and grows in size and seems to be coming out of the screen. It’s a cheap effect, but the only titles on the original film.

The BBs arrive at their hotel and greet more members of the press. Some of the shots are very dark and it’s hard to make out who’s doing what. “I Was Made to Love Her” plays. Again, the press’ voices do not seem to have been recorded at the same time as the film was made.

The structure of the rest of the film bears a similarity to the much more well-known Led Zeppelin film “The Song Remains The Same” from 1976. Interspersed between footage of the band performing on stage and traveling between countries are short “portraits” of each member of the BBs. Here we get an intimate opportunity to learn more about each member and what they’re thinking. Of course, the BB version is much more simplistic and lacks many of the special effects, etc. found in “TSRTS.”

The first BB we get to meet is Bruce. We see him coming out of the tube and onto the street for some sightseeing; Big Ben can be seen in the background. Bruce buys a newspaper and then chills with some fans before taking a stroll in Hyde Park. In Bruce’s voice-over we hear him discuss how he’s been in the UK 12 times over the past 3 years, how it’s his favorite place and that he hopes to run Brother Records from the UK in the future. The last shot has Bruce in the park’s band shelter playing music maestro make believe.

Next we move to outside of the Palladium where we seem clambering fans “talking” about their favorite BB song they hope to hear in concert that night. Then we go inside to see the band on-stage for what looks like a sound check. Then we go backstage and see the BBs changing into their stage outfits- colored shirts with the famous white suits. Al takes his pants off and gives the camera a full moon. “Bluebirds Over the Mountains” begins to play as we see the band performing on stage. We also hear “Barbara Ann.” Behind the band a five-man horn section is visible. Once the clips from the show end “Sloop John B” plays and we go backstage again to watch the BBs change back into their street clothes. Dennis dances across the camera clapping his hands in a clip that’s often been excerpted for use in other films and TV programs. As Dennis changes his clothes we get to see his bare ass too and Mike in his tighty whities.

The next portion of the film takes us to a wharf on a river (Thames?). “Be With Me” plays and we see the BBs getting rowed around in a boat.

Shots of the crew loading equipment, instruments, etc. onto a truck.

“Our Prayer” plays and repeats a few times. Now we’re at a Scottish castle, it’s time for Al’s feature on the parapet roaming amongst the cannons.

Next we go inside and see Bruce playing the piano at a bar/restaurant and Al does the voice-over. Al joins Bruce at the piano and says he composed some songs at this castle last tour- “Cottonfields” and Bruce “Nearest Faraway Place.” Then we see the BBs eating mushroom soup.

We go backstage once more, we see the band getting ready, shaving, combing hair, tuning guitars, white suits and then another on-stage performance while “Fun Fun Fun” plays.

Another restaurant, more soup, they eat in their white suits, “I Can hear Music” plays. The band goofs for the camera and then poses on a balcony.

Now we’re on a train, “Busy Doin’ Nothin’” plays. It’s time to meet Dennis who’s relaxing in a sleeping compartment on the train. It’s a pretty short portrait, we see him lighting a cigarette and picking boogers from his nose.

“Bluebirds” plays as we see the band now in Germany signing even more autographs for adoring fans. A sign on a building reads: “Messe-Hallenverwaltung,” which I think means administration building. The BBs run around some trees and do some more goofin’.

Another on-stage performance while “I Get Around” plays. I should note that none of the scenes of the BBs performing on stage in this film are complete, and of course are not in-synch. Also, the whole film seems to have been filmed with a single camera, so no elaborate edits, just simple cuts. The camera is often not placed near the stage or at a good angle so the BBs are hard to see.

On the bus, on the road, an instrumental song plays, bluesy rock, I’m not sure if this is even a BBs track.

“Darlin’” plays and we’re now at the Beat Club TV show. Behind the scenes during recording, see the station’s screens with the TV director. “Good Vibrations” plays and dancers gyrate in long capes.

Carl in bed loves a “nice relaxing breakfast.” Carl then goes outside to get some air, looks out the window, “God Only Knows” plays, puts on coat, outdoors in Bremen, Germany.

City, revolving door, “Do It Again” plays, outside hotel, stores, off to airport, we meet Mike drinking while waiting for the plane. Then cut to Paris with Mike walking to the Louvre as he passes a street-side public toilet. “Country Air” plays as Mike wrinkles his nose at the smell. Mike looks at stores, goes to a café and watches people, rides in a cab, and then a very-long close-up of Mike as no music plays, just car noise.

At a night-club, drinks, ladies dancing, Dennis signs a “Friends” LP, “All I Want to Do” plays.

“Friends” plays as we see the entire band on a spiral staircase. The end titles run:

*all scans and photos courtesy of the world wide web