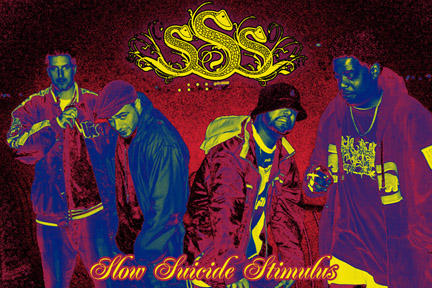 For lack of a better term, SSS is what I’d call industrial hip-hop; think the twisted, alien electronic beats on many of the albums released by the DEF JUX label. The affinity to Def Jux albums is not surprising, given the fact that several Def Jux artists (e.g. El-P, Aesop Rock, Cage, S.A. Smash) make cameo appearances on SSS. Additionally, there are very few samples across the album’s seventeen tracks. Most of the beats seem to be generated by synths and other electronic devices rather than by ripping break-beats off of dusty funk, jazz or soul LPs. Beyond the futuristic, electronic bombardment of the tracks, the industrial nature of SSS is highlighted by a noisy, claustrophobic ambience, characteristic of living in a large, urban environment, such as New York city. If a record brimming with a dystopian worldview coupled with heavy metal beats sounds interesting, Slow Suicide Stimulus is the album for you.
ALL HIP HOP INTERVIEW
ALL MUSIC REVIEW