By DJ M on November 5th, 2006
In Miscellaneous Music 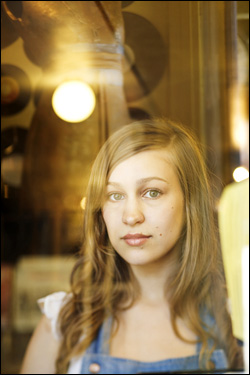 VILLAGE VOICE "So here's the story behind the record: Somewhere around '04 Joanna broke up with her boyfriend of six years, a good man and talented producer named Noah G. who's currently working with Banhart and the rest of the freak squad. She'd lived with Noah for five of those six years, had moved from Nevada City to San Francisco with him, had basically learned much of what she knows about playing music for a living from him. And the relationship eventually buckled under what I assume to be the pressures of her emerging career, although I really don't know, and don't feel like asking, and what I've just told you is pretty much all I feel like knowing or relating on the subject."

"Same goes for her other personal travails from '03 to '05, wherein that dark cloud descended over her family and friends. It was not easy. But somewhere in there she met the Smog guy, Callahan, and they're in love now. Also somewhere in there she heard Van Dyke Parks's Song Cycle, and she got tired of the freak-whatever scene and tried to distance herself from it (no hard feelings). And when it all quieted down she decided it was time to start dealing with that intersection of her Real Life and Public Life, which meant sitting down to write songs about those lovers and these friends and that family and this world her head is all but sewn to: Nevada City, a place that truly does operate at about .03 mph, a place where she says most of her friends don't really register what she does for a living. And these songs she was writing, well, she knew they'd have to be long."