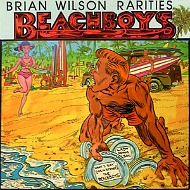 ISTHMUS "[A] copy of the Australian album Brian Wilson Rarities turned up here in town. It's a completely different album than the American Rarities, with only a few songs -- primarily drawn from singles sides late in their Capitol tenure -- in common between the two discs. In fact, the Australian LP packs in 20 tracks, two-thirds of which are actually in the 'related artists' category rather than by the Beach Boys. In many cases, branding an LP as by a band when it's mostly not by said band would be a reason to cry foul, but those familiar with the Brian Wilson universe know the twists and turns make the material here a special case."