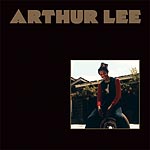 SUNDAZED “has unearthed an unissued 1971 album by revered Los Angeles rock band Arthur Lee & Love, languishing in the Columbia Records tape vault. And that's not all! We've also uncovered a marvelous batch of acoustic demos for the ‘71 album, featuring just the magical voice of Arthur Lee and his acoustic guitar. It's a thrilling twin-discovery of ultra-important material that no one knew existed!” To set up the album, Sundazed are releasing a 7" vinyl single with acoustic demos from '71.