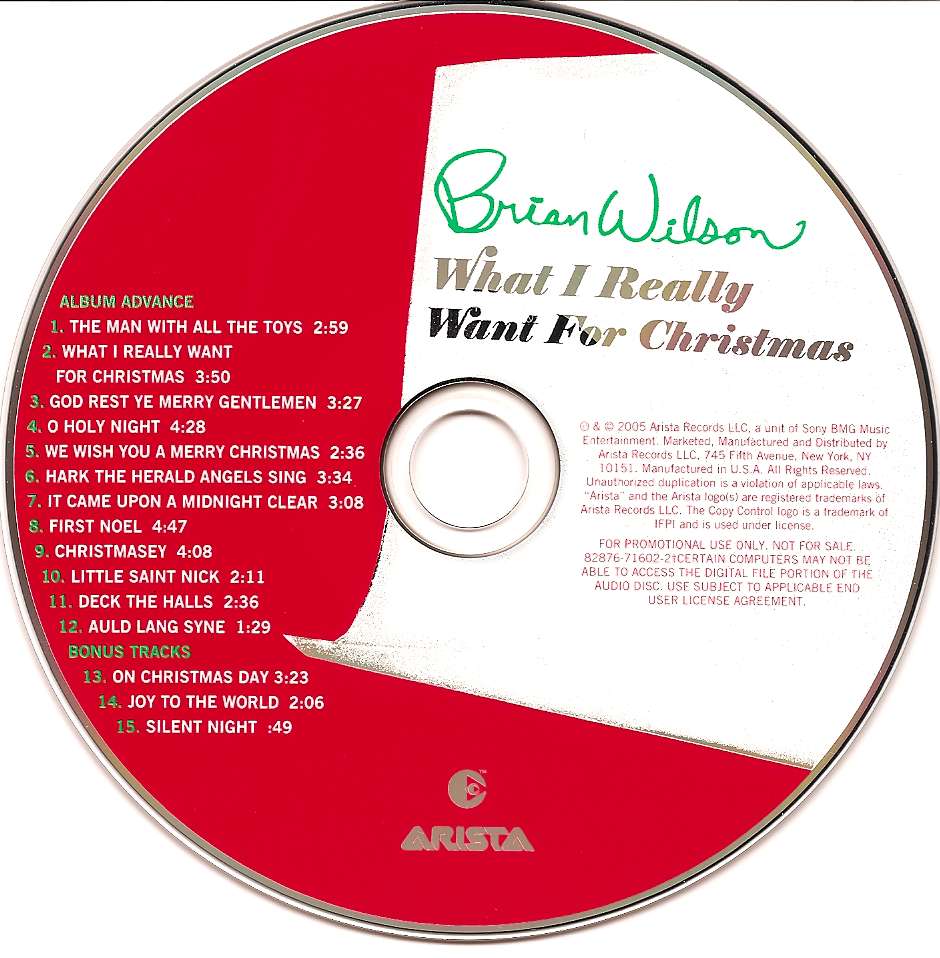 I previously blogged about this advance copy of "What I Really Want For Christmas" at UNCANNY MARK 1. I didn’t have access to a scanner back then, so no scans on the original blog. There’s not too much else to write because I covered it pretty well back in 2005. I would add that unlike most advance promo discs, this one is not a CD-R; it’s a factory-pressed “silver” disc. Also, the printing on the top is not too dissimilar from what you’d expect for an “official” release. The design even has elements from the official release’s packaging, like Brian’s green signature and the red and white coloring. In the legal fine print there’s a warning that “certain computers may not be able to access the digital file portion of the audio disc.” I never put this disc into my computer because I’m worried about the malicious root kit that Sony BMG hid in some discs around the time this album came out. Better safe than sorry.

My views on the album are pretty much the same as they were back when it first arrived. With the exception of the two “new” tunes, there’s nothing really that outstanding here, just solid renditions of classic Christmas songs. The two new songs, “Christmasey” and “WIRWFC” are still the standouts and the only real reason for buying this album, unless you are a tremendous fan of Christmas songs.

Here are my original notes:

On Friday, September 16, 2005 I finally received a promo disc of Brian’s upcoming solo Christmas album, "What I Really Want For Christmas." There are no inserts in the jewel case. Printed on this disc: “Album Advance” & "For Promotional Use Only. Not For Sale." The disc is protected by a copy control system. The disc artwork is simple---a red background with a graphic of a piece of paper that's curled at the bottom, with Brian's signature in green and the album title below it.

Here’s the track listing, and track times, from the disc, along with some of my own notes:

This promo disc came with a "one-sheet", written by David Leaf. Brian Wilson is quoted as stating the following: "Christmas music itself is a very special type of music. It seems to have been written by a godly kind of thing, a godly force brought that down to us."

"I love Christmas because family gets together for the holidays. We all share each other. It’s a wonderful time of year. [I] used to sing these songs to myself when I was a little kid, so recording this album was a little bit of a sentimental thing for me. I love Christmas music, ballads for sure but especially when it’s set to a rock ‘n’ roll beat and the chance to record some of my all-time favorites…well, it just seemed appropriate at this point in my career."

"I loved making this record. When I listen to it, I feel proud and sentimental. Me and my band put out heart and soul into playing the songs and recording the vocals, so I hope the music means as much to other people as it does to me."

Clive Davis, Chairman, BMG US is quoted as stating: "Brian Wilson is a real legend and unparalleled creative genius. The arrangements and the production, the interpretations of the songs all show his individual, unmistakable stamp. In working with Bernie Taupin and Jimmy Webb, Brian really had gone after collaborations with masters and it shows. The result is two new timeless Christmas songs that live up to the criteria for this kind of ‘Christmas classic’ album, that live up to the standard of the timeless great ones. On this record, Brian is ‘being Brian,’ doing a superlative job with the harmonies, the vocals, the tracks, really taking Christmas classics to the zenith of their respective potential. So it has been a joyous project from the beginning."

As I just received the disc, I haven’t really had a chance to thoroughly listen to the album. Nevertheless, here are some provisional remarks. First of all, I should note that I’m naturally disinclined to enjoy a Christmas album. You see, I’m Jewish and was not raised with Christmas songs around the house. Despite my natural bias against Christmas songs, "What I Really Want For Christmas" is a very fine album, expertly arranged, produced and performed by Brian.

Those fans unhappy with the fact that Brian handled both the lead vocals and background vocals on most of "Getting In Over My Head" will be pleased to know that while Brian takes all the leads on his new album, the background vocals are handled superbly by his band. In fact, it’s the vocals that really make this album shine; the harmonies are deep and rich. Furthermore, the production style is classic Wilson; overall, the "sound" of the record is very much in line with the sound Brian & Co. achieved recently with "SMiLE."

The standout tracks are the two new tunes: the title track, with lyrics by Bernie Taupin, and "Christmasey", with lyrics by Jimmy Webb. The title track slowly unfolds into an exquisite arrangement. The title track starts with an a capella intro; then, little by little, touches of piano, chimes, flute and harp caress Taupin’s sophisticated lyrics. The drums don’t come in until approximately 1:14 into the track. The track stands up very well against the other classic Christmas songs on the disc.

"Christmasey" also stands up very well. The song is full of fun and cheer. Two excellent harmonica solos, plus and instrumental outro, create tension and release throughout the song. The last lines of the song sum up the feeling Webb was trying to relate: "It didn’t snow/But we all agree/It’s still Christmasey."